Typical representative of group of the North Chinese early peaches. About 1891 is brought out of seeds of a grade of Konnet in America. At us this grade was introduced by the Nikitsky Botanical garden about 1896 for the first time. From here it extended in the Crimea, on the Black Sea coast of the North Caucasus and in Georgia on what specify mentions it in catalogs of old nurseries. By 1936 it was allocated with the Nikitsky garden as one of perspective grades of early term of maturing, and in 1937 — 1938 is placed for broad production test on a sortouchastka of the Crimea, Krasnodar Krai, the Grozny region, Moldova, Georgia, Azerbaijan, Uzbekistan and, besides, was transferred to a number of skilled establishments of the southern zone USSR. On the agrobiological indicators this grade has many merits before which some of its shortcomings retire to the background. Essential shortcomings of this grade we consider as the only thing the tenderness of its fruits which is a little complicating them transportation, in particular in inappropriate conditions of packing. Now Greensboro is included the list of standard grades in the following areas, the republics and edges: in South careful and foothill zones of the Crimea (on the first group); in prikubansky, foothill and Black Sea zones of Krasnodar Krai (on the second and third groups); in plane and foothill zones of the Grozny region, in all zones North Ossetian the Autonomous Soviet Socialist Republic, in steppe and foothill zones Kabardian the Autonomous Soviet Socialist Republic, in West steppe and foothill zones of Stavropol Krai (on the third group); in foothill and low zones Azerbaijani the Soviet Socialist Republic (on the first and second groups); in low zones of northern and southern parts of the Armenian Soviet Socialist Republic (on the second group); in Uzbek the Soviet Socialist Republic (on the second group); in Tajik the Soviet Socialist Republic (on the first and second groups). Besides, undoubtedly, he deserves attention for cultivation in the certain regions of Georgia adjacent to the cities and industrial centers. A tree large, with sprawling krone. One-year escapes of average length and thickness with short interstices, dark-crimson coloring on a lit side, smooth, with very small chechevichka. On normal escapes the group arrangement of kidneys prevails. Flower kidneys large, an ovoid form, with srednezaostryonny top, trimmed. Leaves of the average sizes (12 —-16 cm of length), it is frequent lodochkoobrazio put on the central vein, with the deflexed ends, thick, leathery; the top surface temnoze-lyonny, smooth, lower — greenish-gray, edges in round figures-pilchatye, scapes about 1 cm of length with large, oval sedentary pieces of iron (sometimes passing to the plate basis). Flowers large, on very short pedicel, with light pink, above the average sizes, petals, wide oval, almost rounded shape; cup tube of a kolokolchaty form, light-yellowish-green coloring inside; chashelistik are very wide, stupid, naked from the inside and trimmed outside; the ovary and the basis of a column are trimmed, the pestle is lower than long stamens. Fruits large (57 — 59x62 — 63x59 — 61 mm, average weight about 120 g), oval with the roundish, slightly dulled top and with a blyudtsevidny pole on it to 5 — 8 mm of depth; the basis dulled with a pole to 15 mm of depth and 20 — 25 mm of width; back party wide, belly a little convex; the belly seam of the average sizes which is gradually going deep to top. The thin skin quite strongly and rigidly trimmed, thick, dense, rough, separates from pulp easily; the main coloring greenish and cream with a flush in the form of strokes and points og yarkomalinovy to wine-colored, occupying to a quarter of all surface of a fruit. Pulp greenish and cream with an unpainted chamber, juicy, fibrous, average sugar content (on average 8.04%), average acidity (on average 0,46%), aromatic, pleasantly refreshing taste. A stone of averages and above the average sizes, a return and ovoid form with an outstanding back seam: the basis which is slightly dulled with not clear, wide oval ring: top it is so-so pointed-gyutkim by an edge. The belly seam of average width which is gradually narrowed to the basis considerably acts over edges of the bordering furrows and consists of 4 — 5 sharp, densely located plates; the bordering furrows not always clearly are expressed. Sides evenly roundish with yamchato-furrowed architecture, grooves the deep, curved and twisting, located, mainly, in the top part stones; the edges which are slightly pointed with a rough surface in fresh in dairy-yellow colourings, and in dry dark-cream. From pulp does not separate and only in overripe fruits it poluotdelyatsya, very often cracks long before maturing of fruits. Distinctive signs of a grade: on a general view of fruits and terms of their maturing this grade close reminds Early Rivers's fruits. but differs from it in a number of morphological features as, for example: a) omission (Greensboro has it rigid, shchetinisty, prickly, at Early Rivers softer, velvety and felt); b) a pole at fruit top (Early Rivers has it furrowed, passing on a fruit kick, the trace of a column lies often on a hillock, Greensboro has a blyudtsevidny pole, an expanded form, the column trace, as a rule, lies at the bottom of this pole without any hillock); c) a stone (at Greensboro the bordering furrows of a belly seam not clearly are outlined whereas at Early Rivers they are always clearly expressed; the belly seam strongly acts over edges of the bordering furrows and its plates are densely connected, and at Early Rivers the belly seam consists from rykhlo the located plates and not so strongly acts over edges of the bordering furrows) and t. d 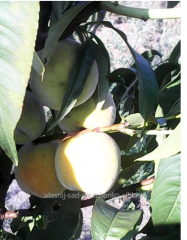 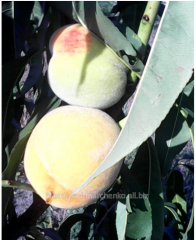 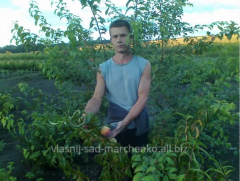 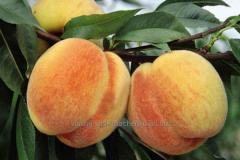 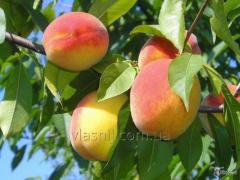 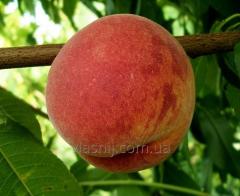 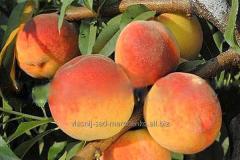 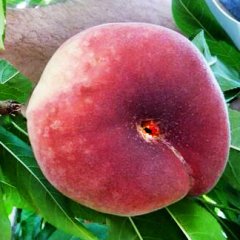 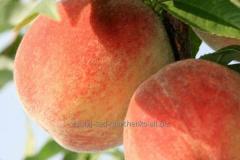 Peach grade of Greensboro. in other languages